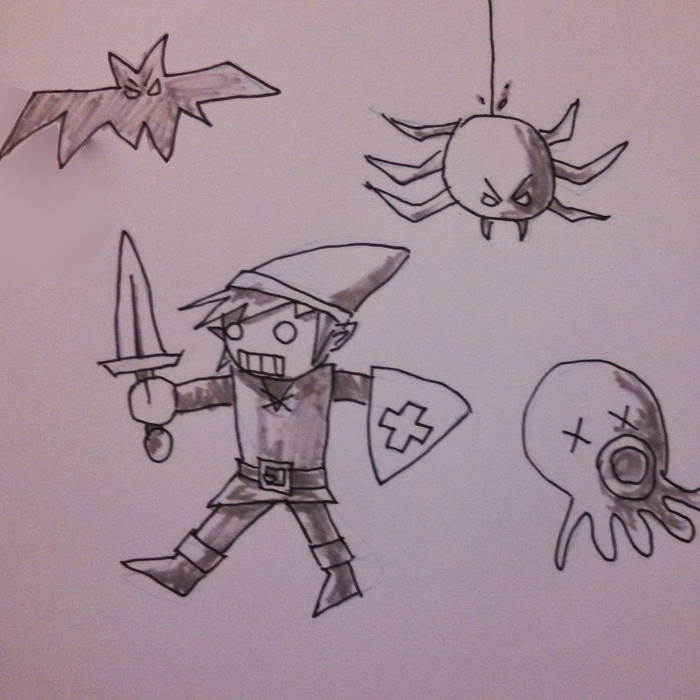 With some regularity, I get asked when I first started covering video game music, and what my first song was. I always explain that I first did a terrible cover of the Zelda II Palace theme back in 2003, with a jerry-rigged recording setup and back before I was any good at guitar. I also explain that the song was lost on a hard drive years ago, which it was.

I've always felt bummed out by losing the song. Even though it was a boring arrangement and really showcased my limitations, it was the starting point in what has turned into a big part of my life.

A few weeks ago (early November 2014), a buddy of mine named Wade Matteson casually brought up that he had a CD I had burned for him a long time ago with a bunch of random music (Creedence, Primus, etc) and that the last track was this weird Zelda song that he thought I had made. Wade ripped the track off the disc and sent it over, and (lo and behold) it's the same Zelda II track from eleven years ago.

I now get to share this embarrassing (but important) piece of my history for all of you. It's not a great remix by any stretch of the imagination, but it IS a testament to fighting through your obstacles to accomplish what you want to.

I recorded the guitar with a Korg D8 digital 8-track (SM57 mic on my shitty 30 watt Crate combo amp), ran the RCA audio-out to the 1/8" input on my computer's stock soundcard, recorded the input with Audacity, tossed the guitar into Fruity Loops 3 (before it was known as FL Studio) and had to manually pitch-shift the guitar a few cents up and down at various points in the song to overcome a weird tempo bug. The drums are just samples that I had, the bass is a terrible VST instrument, and outside of some volume adjustment and panning, I didn't do anything in regards to mixing or mastering the song, since I had no idea what that stuff was. I did manage to drench everything in reverb, though.

Obviously, this isn't the best way to record music. However, it was this process which would carry me through my first full-length album over the next two years. From there, I've pursued new knowledge and new equipment to the point where I feel much more comfortable with the quality of the music I'm making.

Anyway, don't ever let limitations or a lack of hardware prevent you from making music. If I could crank out this horrible Zelda track back before the home-recording revolution really hit its stride, then you can do anything.

Thanks for checking it out, and keep the world metal!